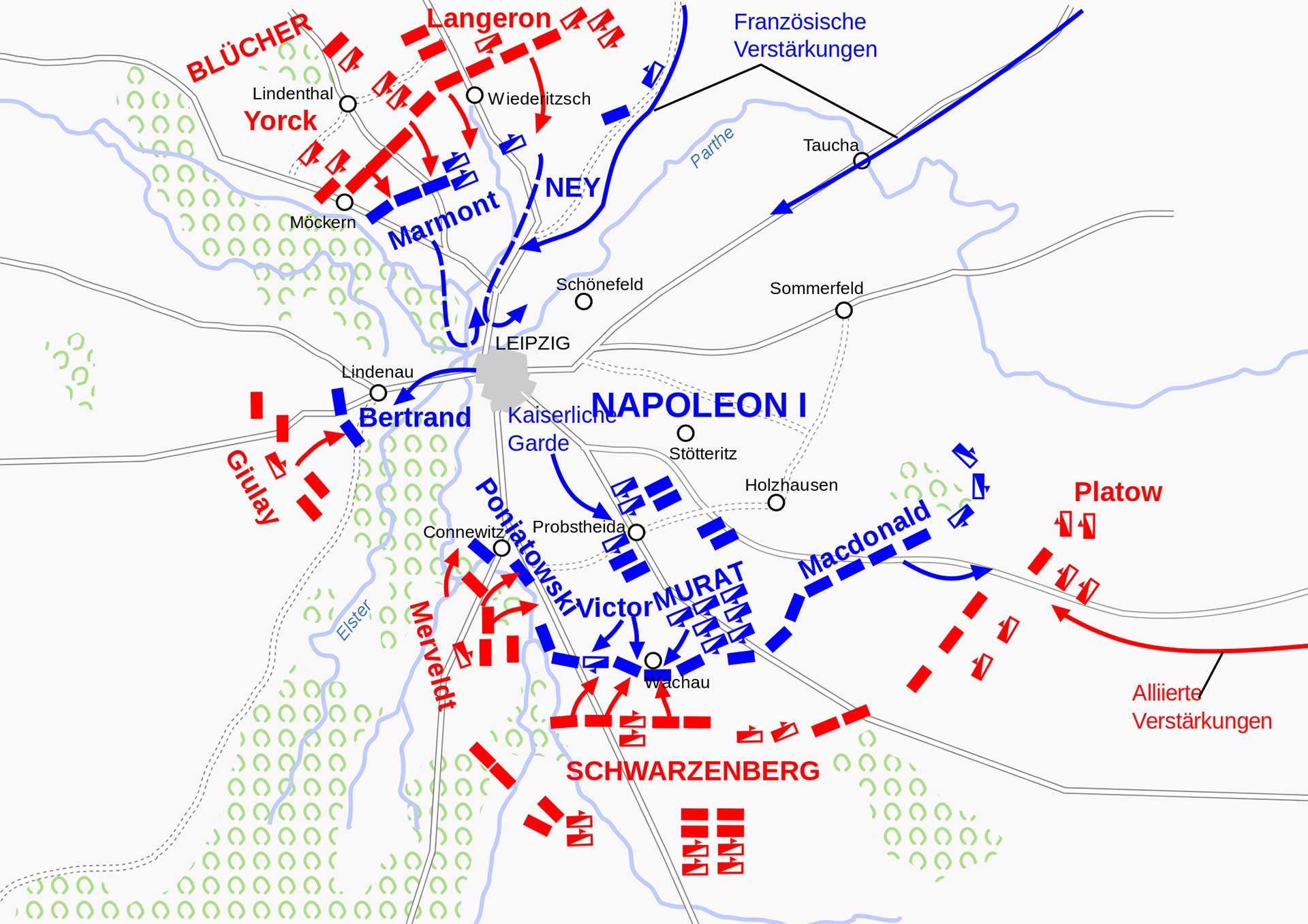 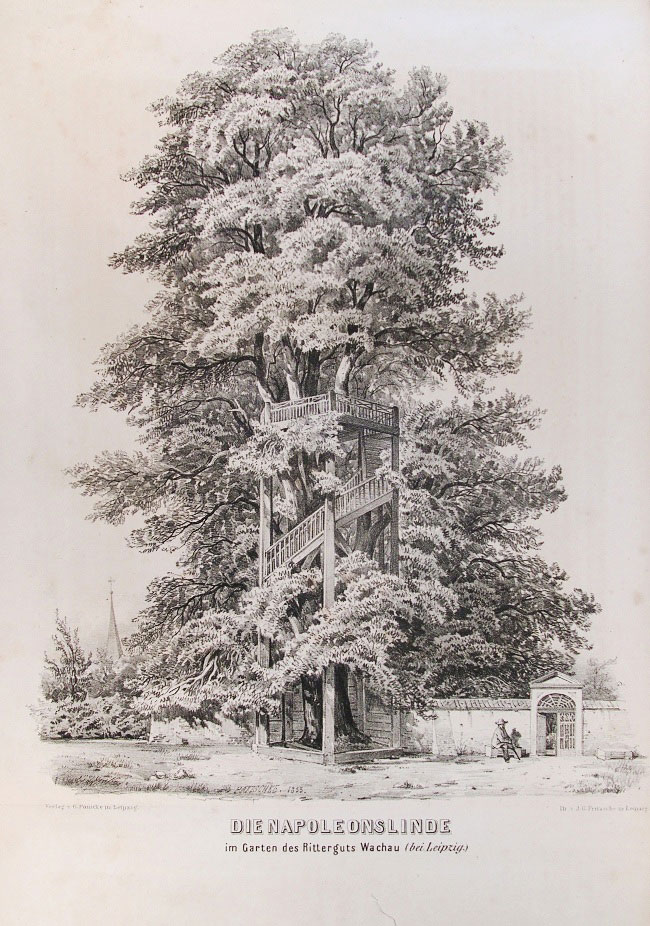 The Battle of the Nations near Leipzig

Situated in the middle of the southern battlefield, the terrible battles of the Battle of the Nations near Leipzig took place here and in the Surroundings from 16 - 19 October 1813.

The Battle of Wachau on 16 October 1813, in particular, became sadly famous with the deployment of almost 250.000 soldiers on both sides as the greatest battle in the history of mankind to date. The soldiers fought fiercely for every meter of the battlefield, at the end of the day 20.000 soldiers were dead on the side of the Allies alone, but the front line had not moved an inch.

The headquarters of Joachim Murat, King of Naples, Marshall of France and brother-in-law of Napoleon, was located from 11 - 15 October 1813 in the former manor at Wachau, on whose grounds today stands the Pension Völkerschlacht 1813.

From here, more precisely from the gallery in the Napoleonlinde, he commanded the cavalry of the Grande Armee during the cavalry battle at Liebertwolkwitz on 14 October 1813. Later he himself led a cavalry attack with 5000 riders, both of which he barely escaped capture. In the late afternoon, both sides retreated to their starting positions. Napoleon gained time to move his troops to the south of Leipzig. However, this further weakened his cavalry, which later turned out to be a disadvantage.

After Wachau was conquered by Prussians and Russians under Schwarzenberg on the morning of October 16, but had to be abandoned after a heavy artillery fire, Murat, as commander of the Grande Armee cavalry, led an 8.000-strong caval attack against the centre of the allies near Güldengossa, which was fought back.

In the following days Napoleon's troops had to retreat further and further towards Leipzig and finally on the morning of 19 October they had to flee westwards towards Weißenfels. The battle was decided, Napoleon's Grande army had been defeated, but not destroyed. Many more fights were to follow until the final defeat of Napoleon was sealed at Waterloo in 1815. 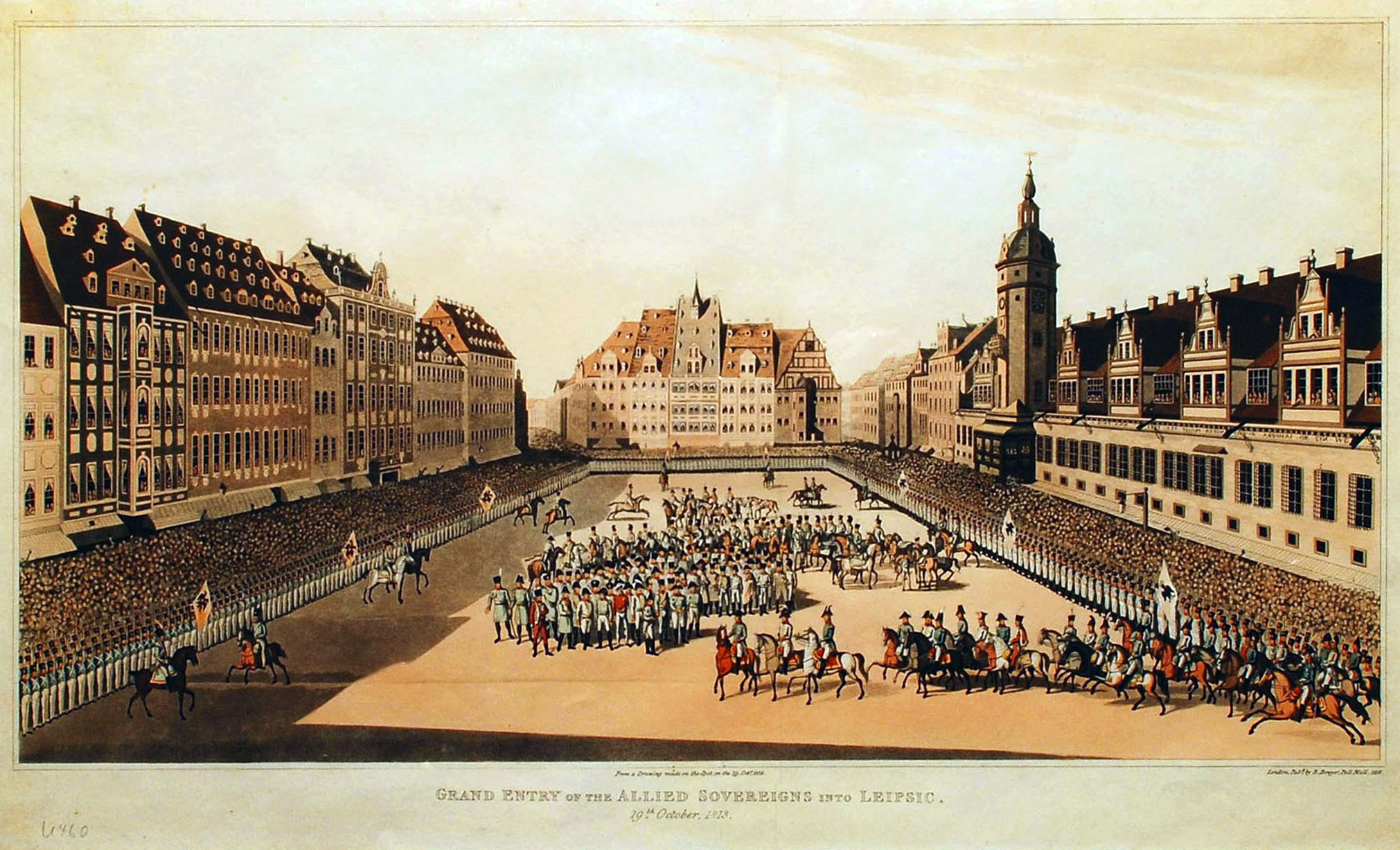 The victorious monarchs triumphantly moved into Leipzig, but the cheers of the Leipzigers during the Victory Parade on the Market Square were short.

For now they stood alone with the terrible consequences of the battle, unimaginable misery and suffering reigned in the city. Of the approximately 600,000 soldiers involved in the battle, 92.000 were killed or wounded. In addition, 30.000 French soldiers were unable to leave the city in time after a bridge was blown up prematurely.

The streets and squares of Leipzig, the suburbs and battlefields were covered with dead, wounded, prisoners and animal carcasses. It should take months to bury the dead, and the number grew daily. Because there were neither enough hospitals or doctors and the supply of water and food was not even nearly guaranteed. The hygienic conditions were catastrophic and a typhoid epidemic broke out in the city. It took thousands and made no distinction between Russians, Prussians, French or Saxons, civilians or soldiers.

Leipzig had been spared the feared destruction, but had to bear the direct effects of the battle for a long time to come. 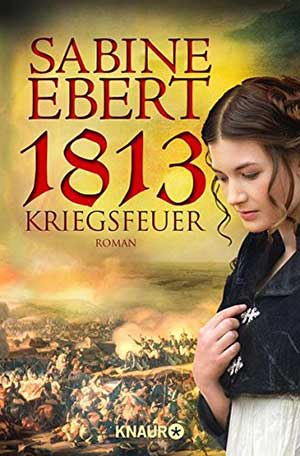 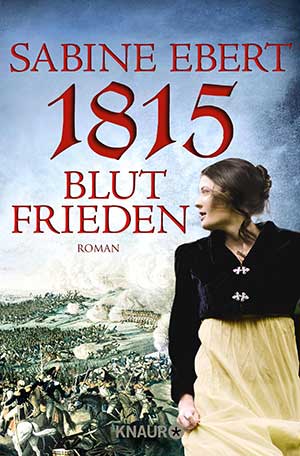 Sabine Ebert's novels "1813 Kriegsfeuer" and "1815 Blutfrieden" are recommended for those who would like to learn more about this time of German and European history or prepare themselves historically for a visit to us.

In these two novels Sabine Ebert describes the period from the beginning of 1813, through the Battle of Leipzig to Napoleon's defeat at Waterloo.

Historically meticulously researched, it links real places, persons and events of this time with the fictional story of her character Henriette, who is driven through half of Germany by war. It is about kings and diplomats, spies and intrigues and the lives of the common people on whose shoulders the burden of war ultimately lay. Already after a few pages you feel like you are back in those days and experience history at first hand.

They learn about the circumstances of life at that time and about the political backgrounds that were ultimately miles away from what the people of the hoped to believe in that time. Their desire that the war would lead to peace, freedom and a united homeland was a misbelief, this war brought them only infinite suffering and devastated landscapes. The emperors and kings had other goals, they only wanted to secure their power and extend their territories.

The novels shed light on a little-known chapter of German history, a cynical, dramatic and bloody chapter in which there were few victors but hundreds of thousands of victims and losers.

On over 2000 pages Sabine Ebert has not written a book about the war but a moving epic against the war.

For those who do not know history are forced to repeat it! 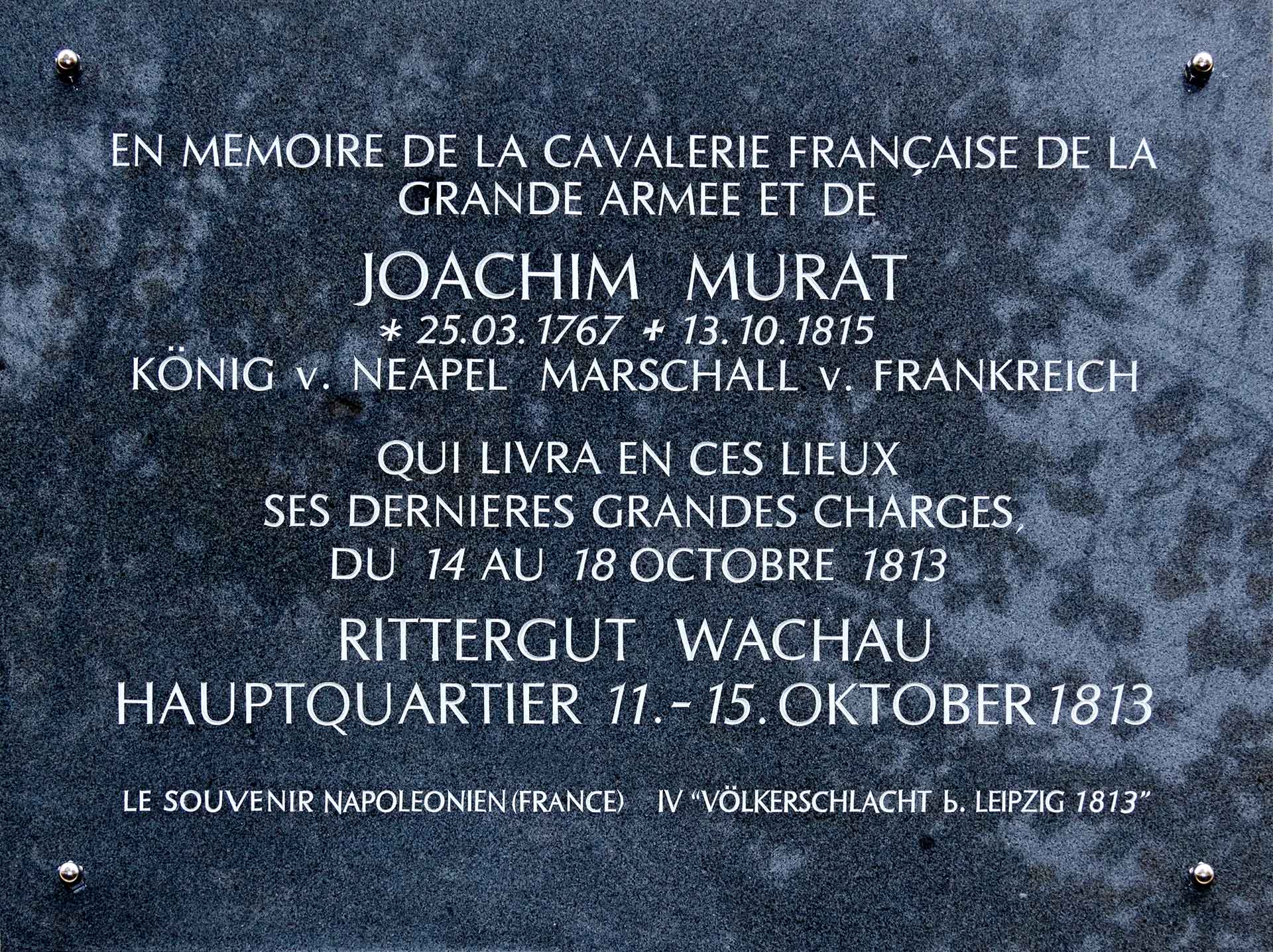 200 years of the Battle of the Nations

On the following days, numerous events took place at historical sites in and around Leipzig, at which people from different countries met. 200 years ago their ancestors had perhaps still fought against each other, now they discussed and celebrated with each other, made new friends, lived international understanding.

A highlight of the anniversary events for the 200th anniversary of the Battle of the Nations was an impressive historical battle presentation with over 6000 participants from all over the world and 35.000 visitors. 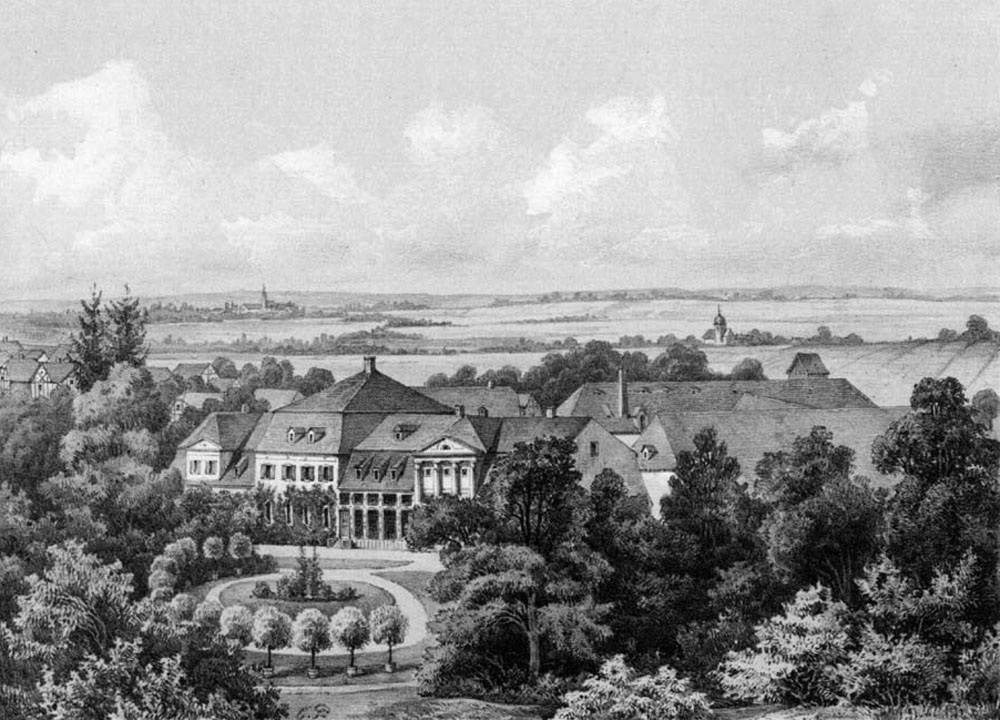 Today there are no original buildings of the former manor, only the park of our pension was a part of the manor park.

Also the so-called Napoleonlinde, a large lime tree with a gallery, which was used by Murat and Napoleon and later by the allies as an observation point for the battles, no longer stands. After being struck by lightning in 1876, a new lime tree was planted in almost the same spot, under which several monuments are now located. 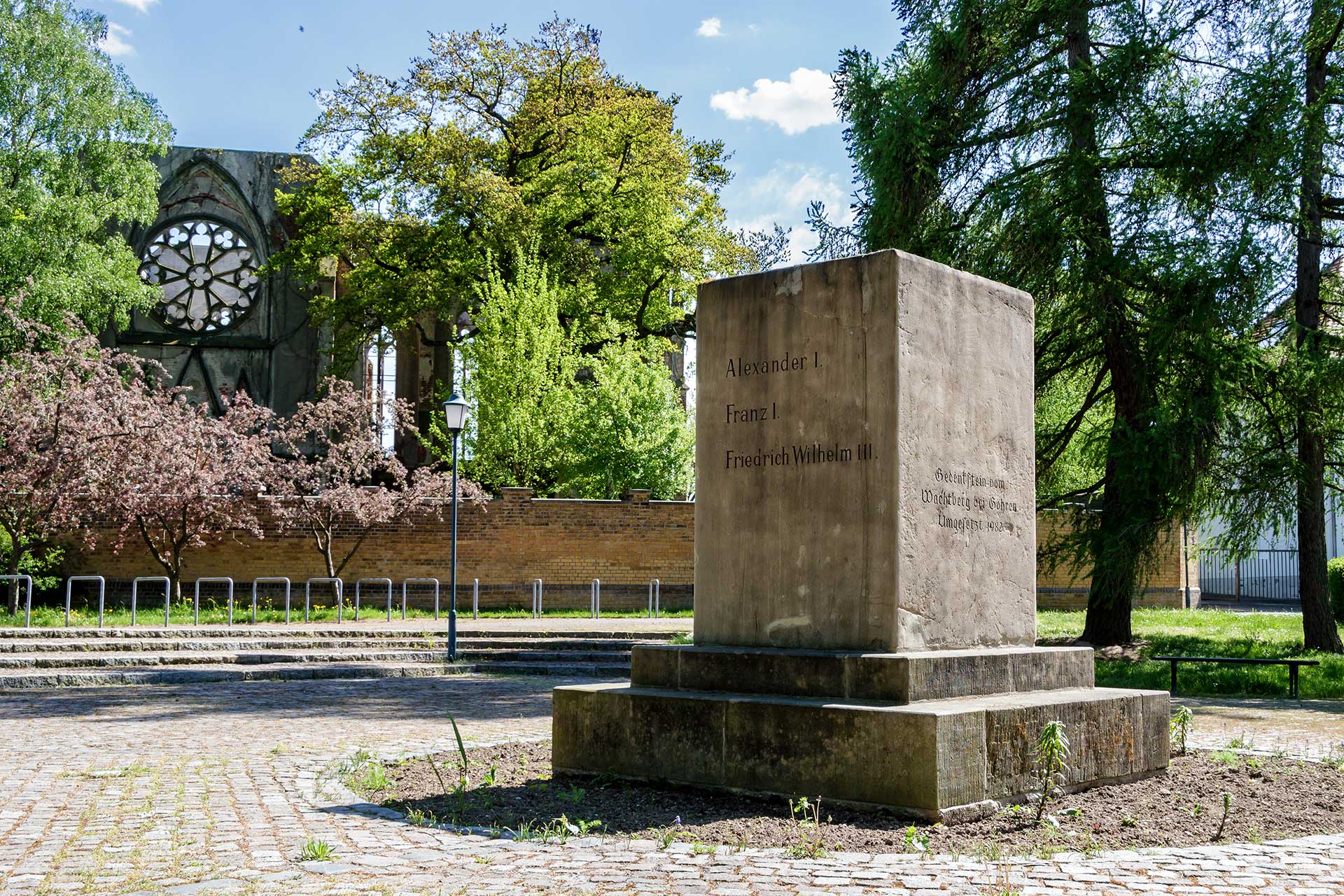 Other monuments can be found in the immediate vicinity of our guesthouse.

The Wachtberg Monument is located directly in front of our front door at the church ruin Wachau. It originally stood on the Wachtberg near Göhren/Magdeborn and marked the position of the three monarchs at the beginning of the Battle of the Nations on 16 October 1813. It was implemented in 1982 because the site had to make way for open-cast lignite mining. 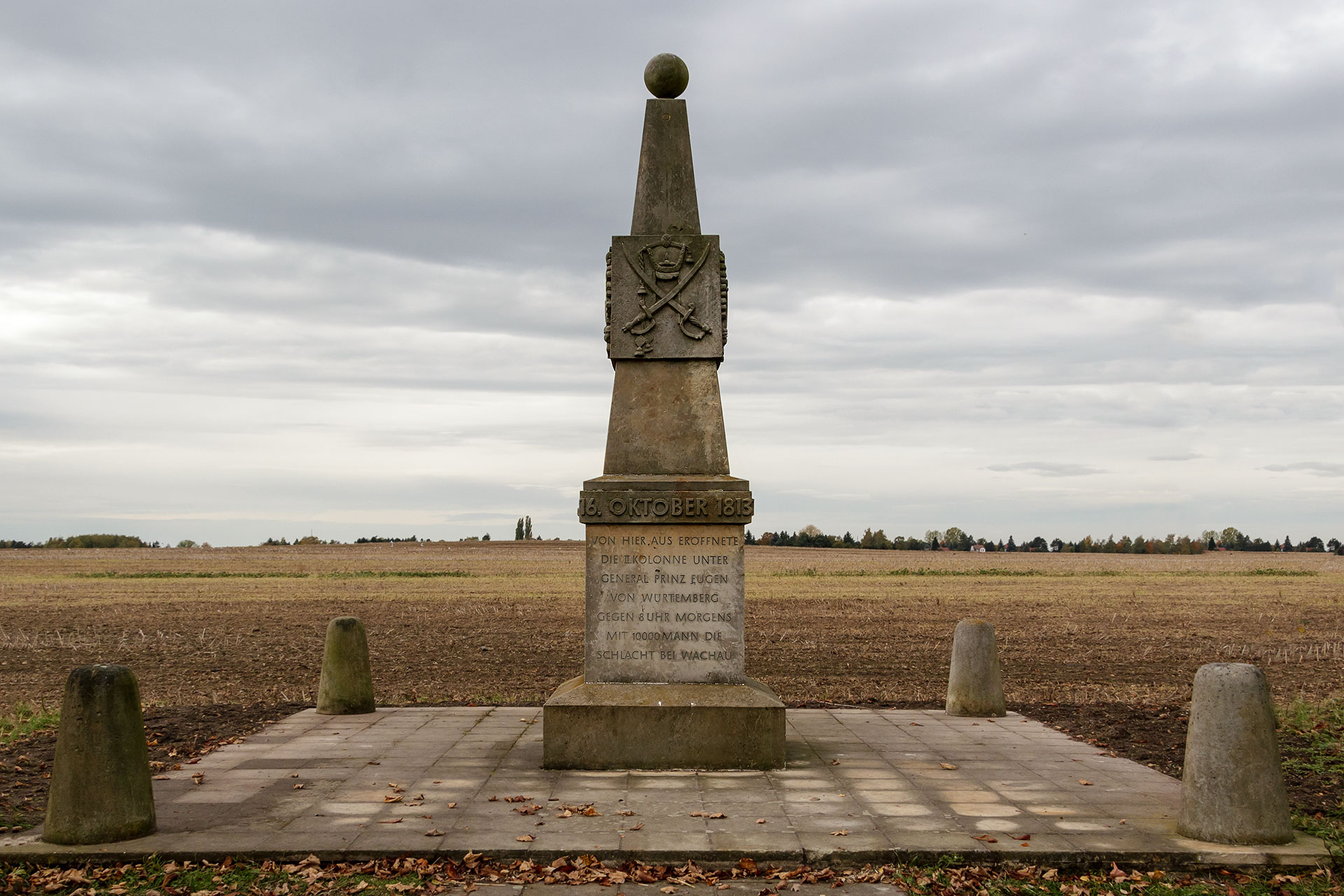 On the southern battlefield, in Liebertwolkwitzer Strasse, there is the Russian-Prussian Monument. It marks the place where the Corps Prince Eugene of Württemberg (Russian troops) and the Klüx Brigade (Prussian troops) opened the Battle of Wachau at 8 o'clock on 16 October 1813.

Right next to it stands the Apelstein No.2, the southern battlefield itself is an area monument. 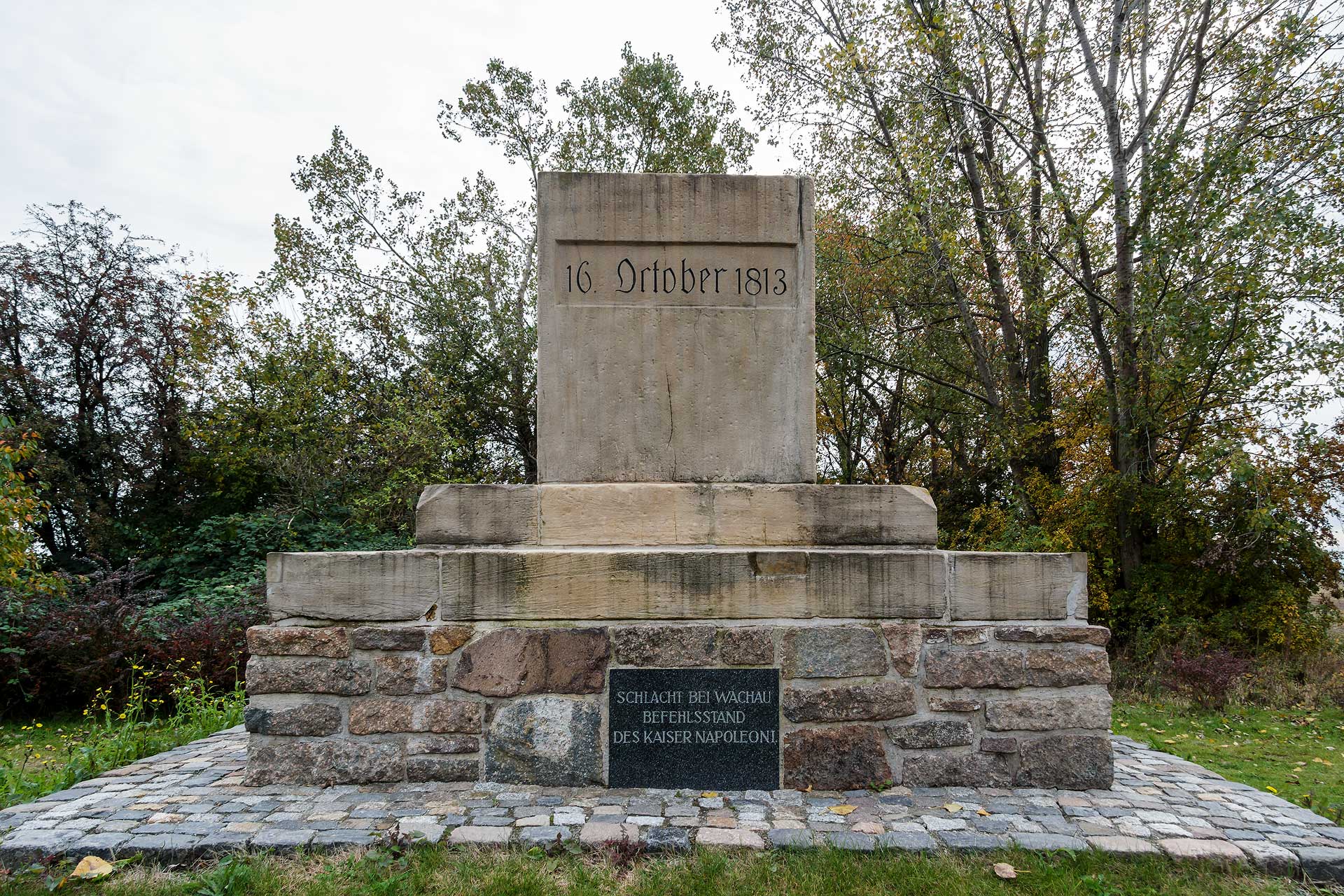 On the road from Wachau to Liebertwolkwitz, just before the motorway, is the Galgenberg Monument. This was Napoleon's command post on 16 October 1813.

Interesting in this context is a small plaque on the back of the monument with a Bible reference (Job 38/11): "You shall come here, and no further...". In fact, Napoleon never went further south in the Battle of the Nations. 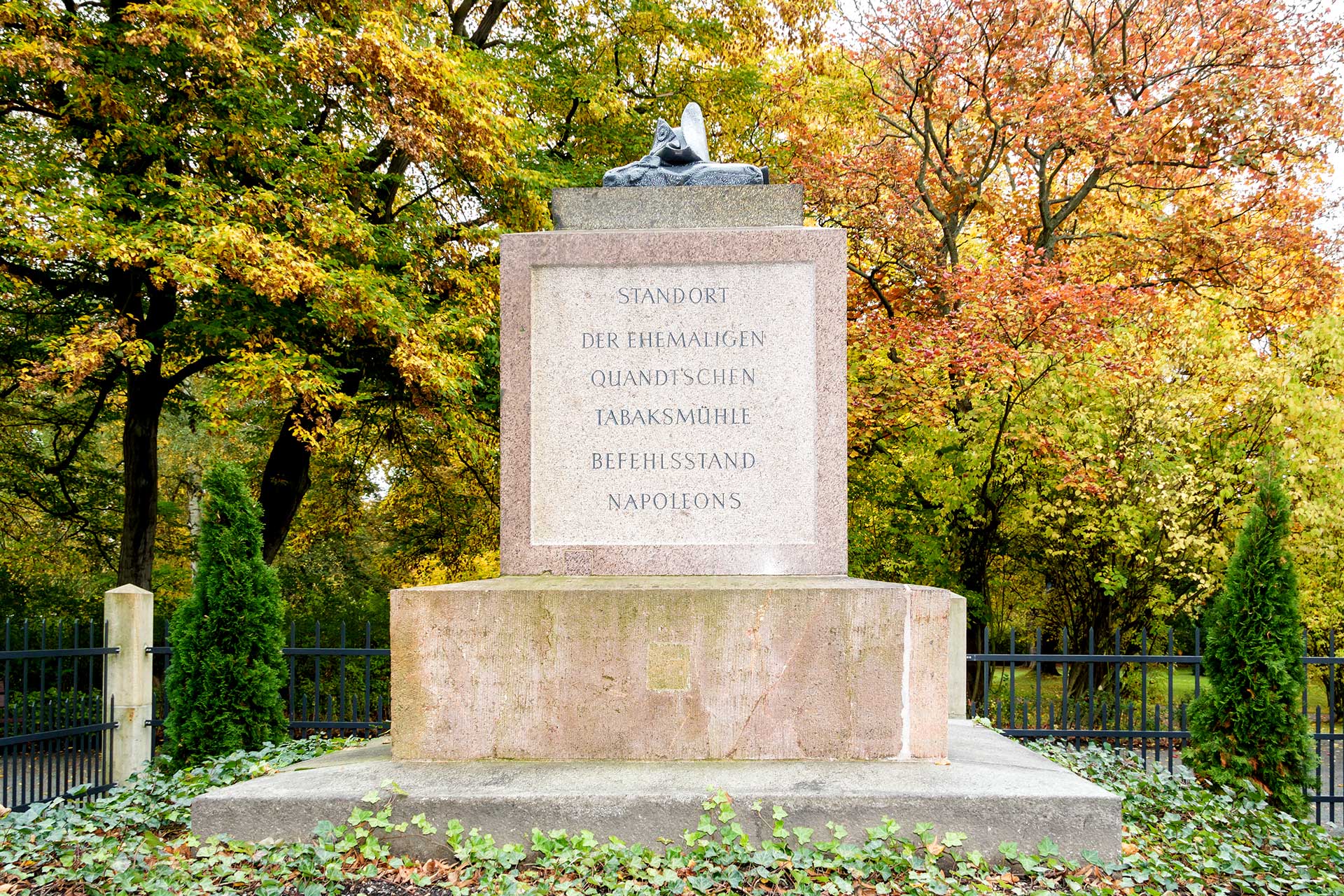 On October 18, he retreated north to the Quandt Tobacco Mill and established his command post there. The Napoleon stone stands here today, you will find it in the park next to the Battle of Nations Monument.

The Quandtsche tobacco mill belonged to the Quandt family, at that time tobacconist and owner of the Wachau manor. By the way, the gate in the park is the so-called Windmühlentor, Leipzig's last preserved city gate. After dismantling the city gates, the Quandt family brought it to their park. 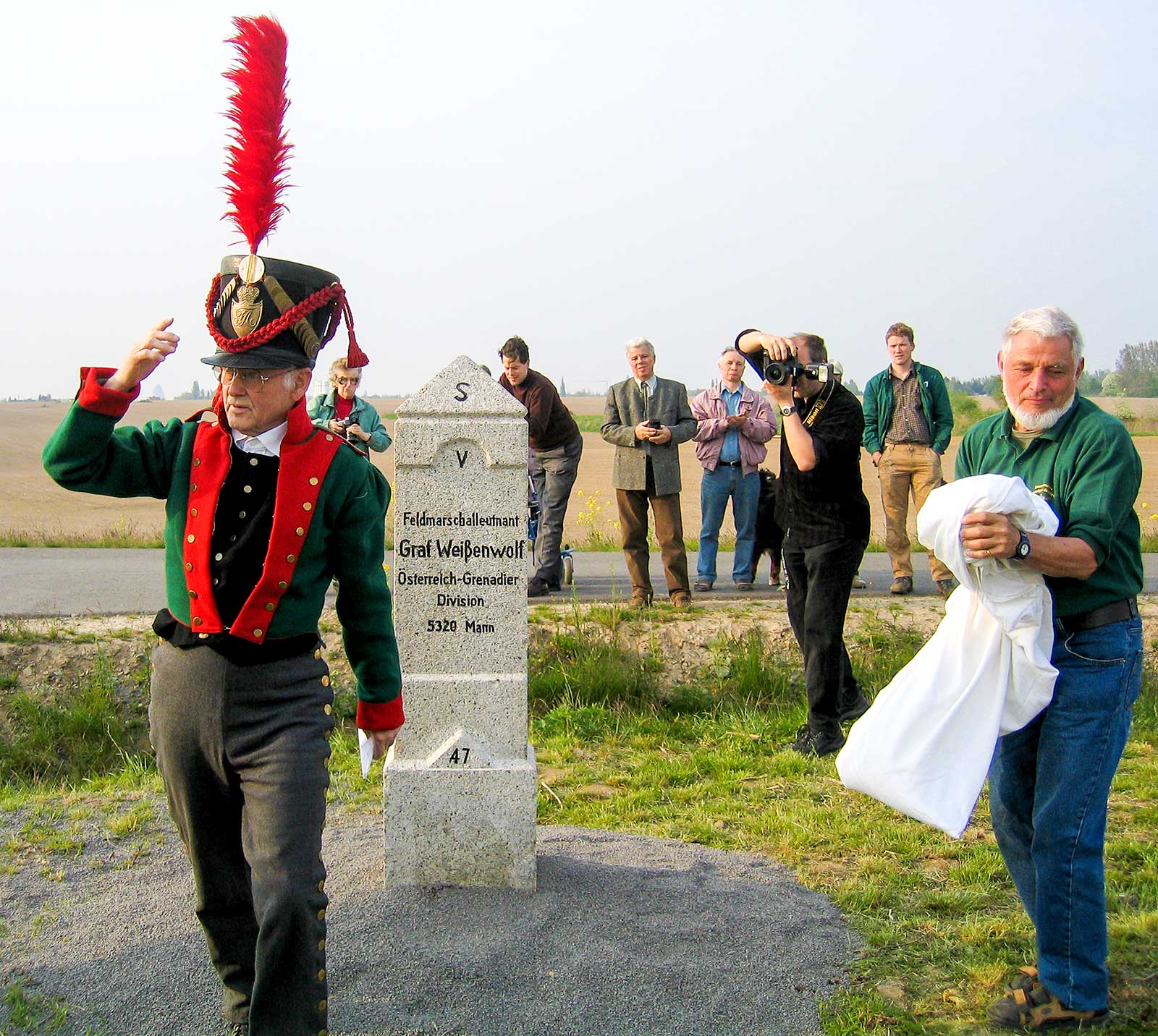 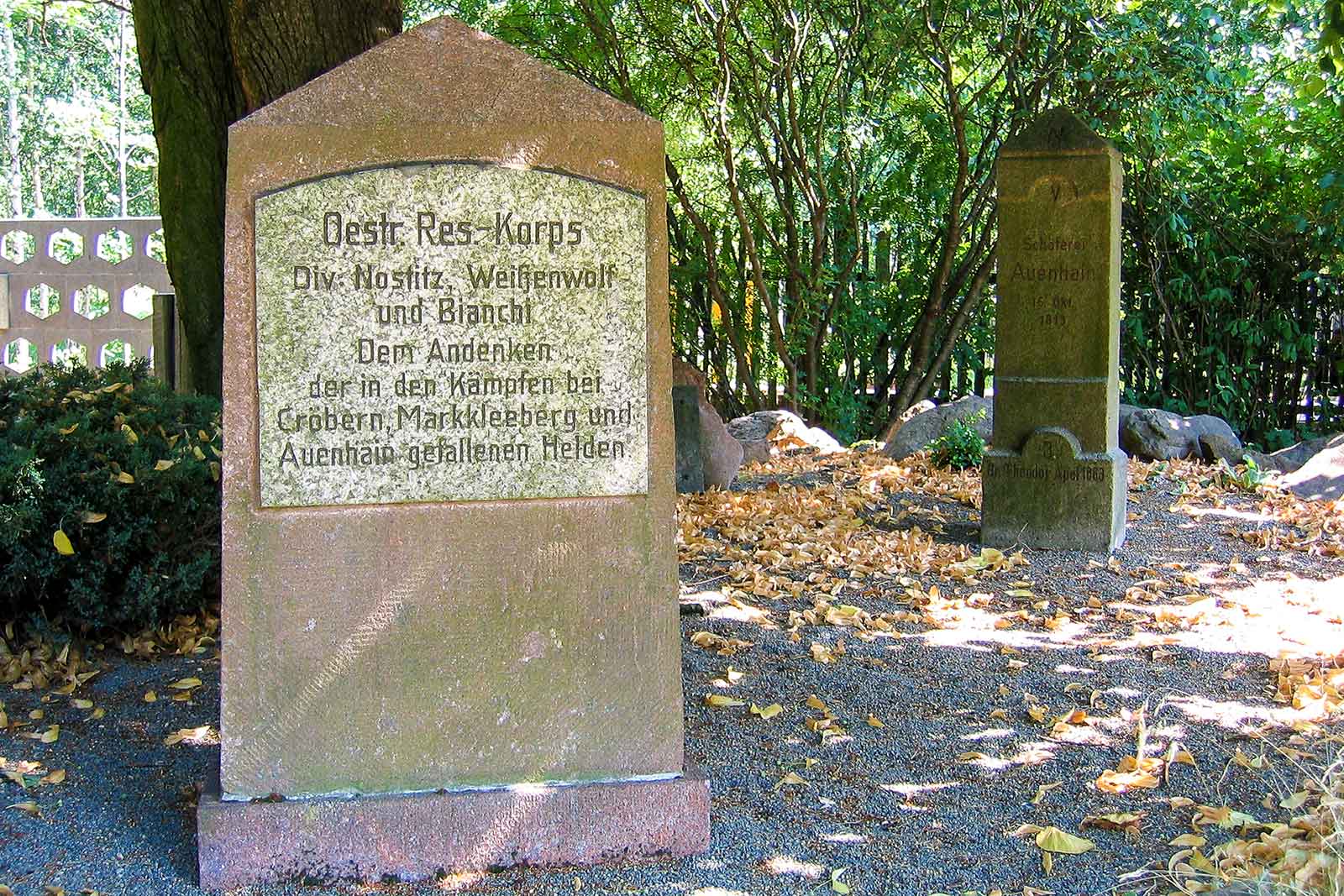 Between 1901 and 1994 Leipzig clubs continued this tradition and set the stones number 45 to 48. 1938 the stone number 47 was set up at the sheep farm (Vorwerk Auenhain) in Auenhain. Curiously, he was number three at the time, a stonemason's fault.

However, it had to give way to open-cast brown coal mining in the GDR and was parked on the site of the Wachau estate (formerly VEG Wachau, today Pension Völkerschlacht 1813). In 2004 it was restored and put up again on the circular path of Lake Markkleeberg, almost in its original place. You will find him at the northern corner of the holiday village "Seepark Auenhain".

The original location is now in the middle of Lake Markkleeberg.

Here you will find a list of all apple stones. 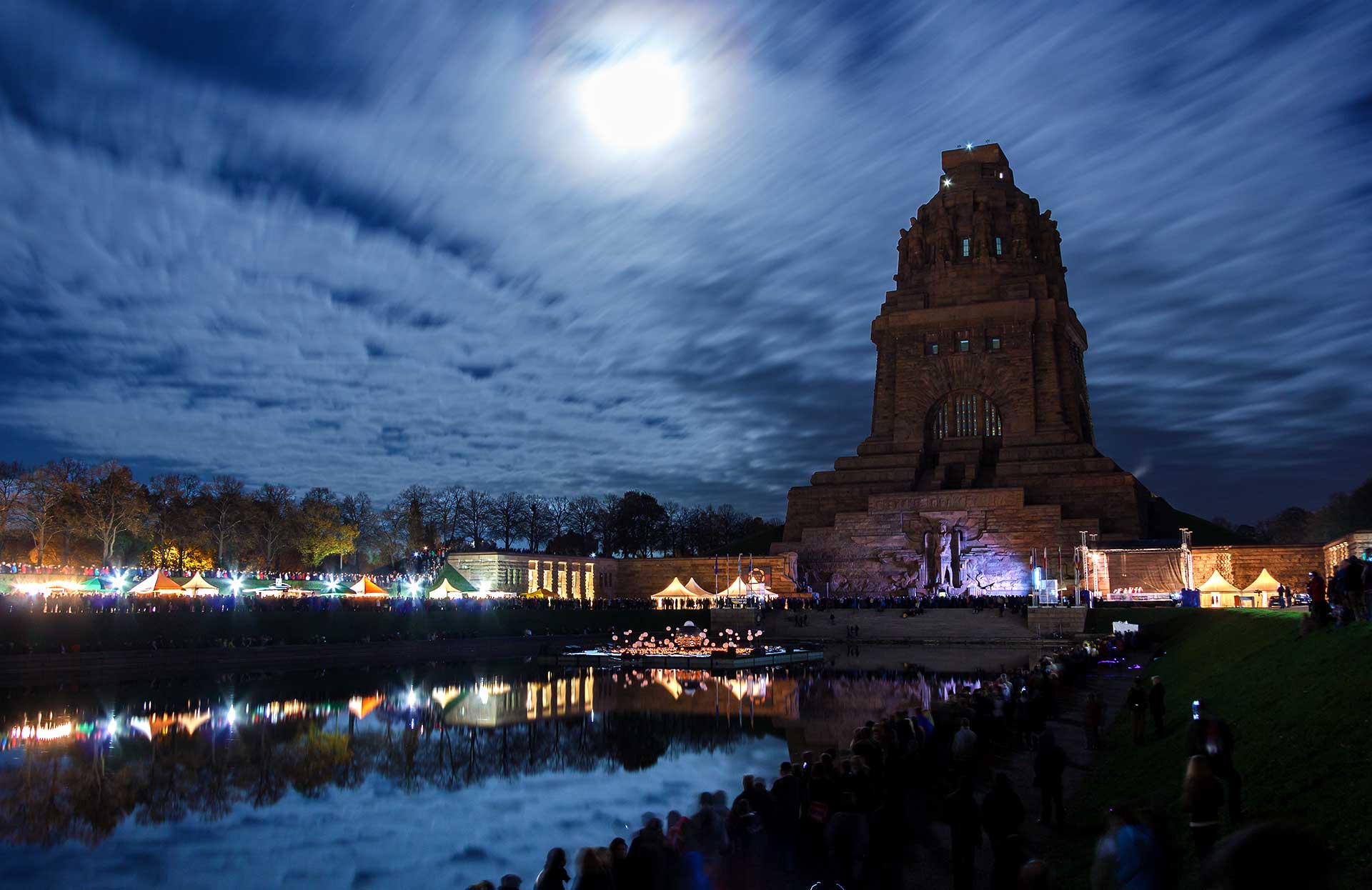 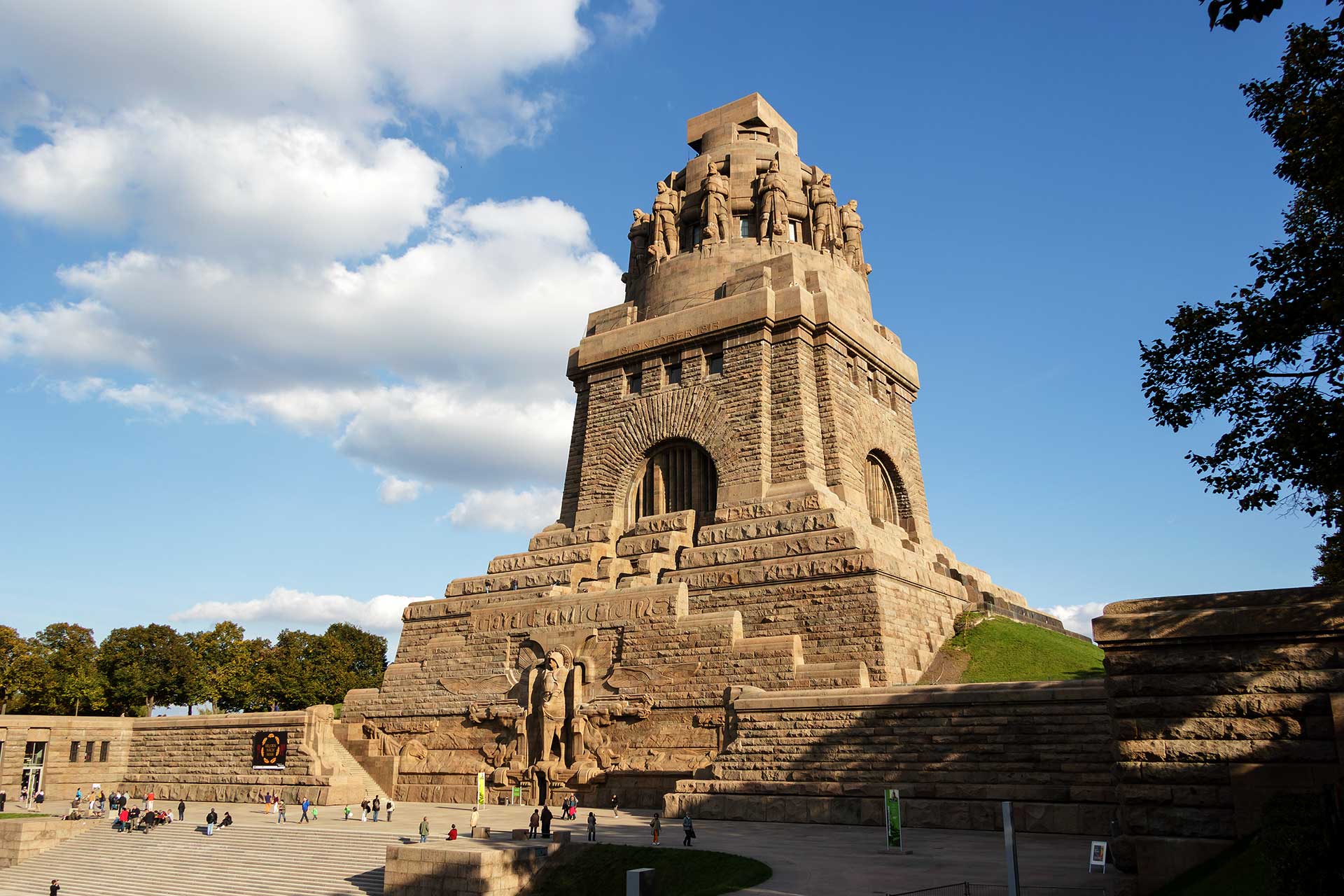 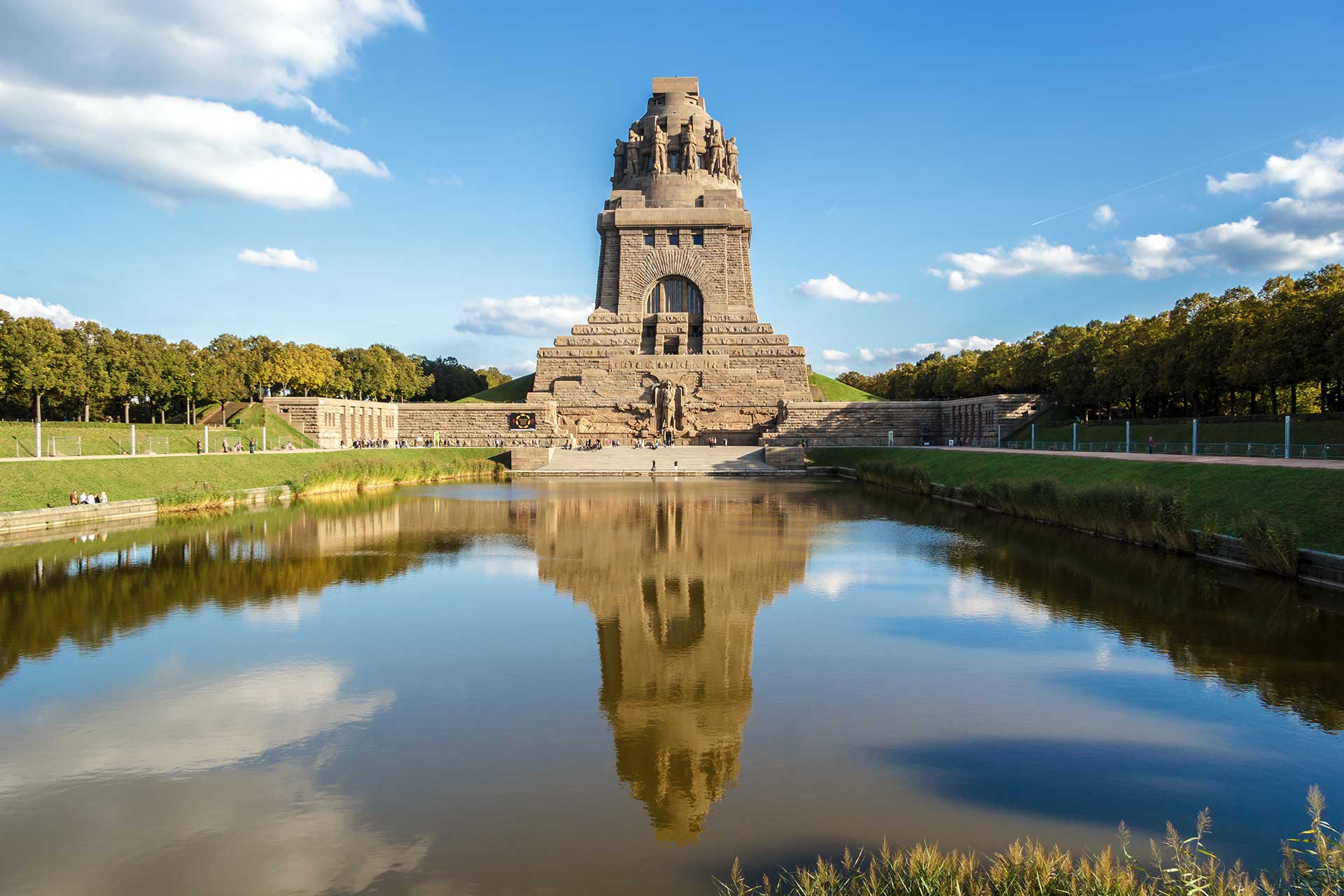 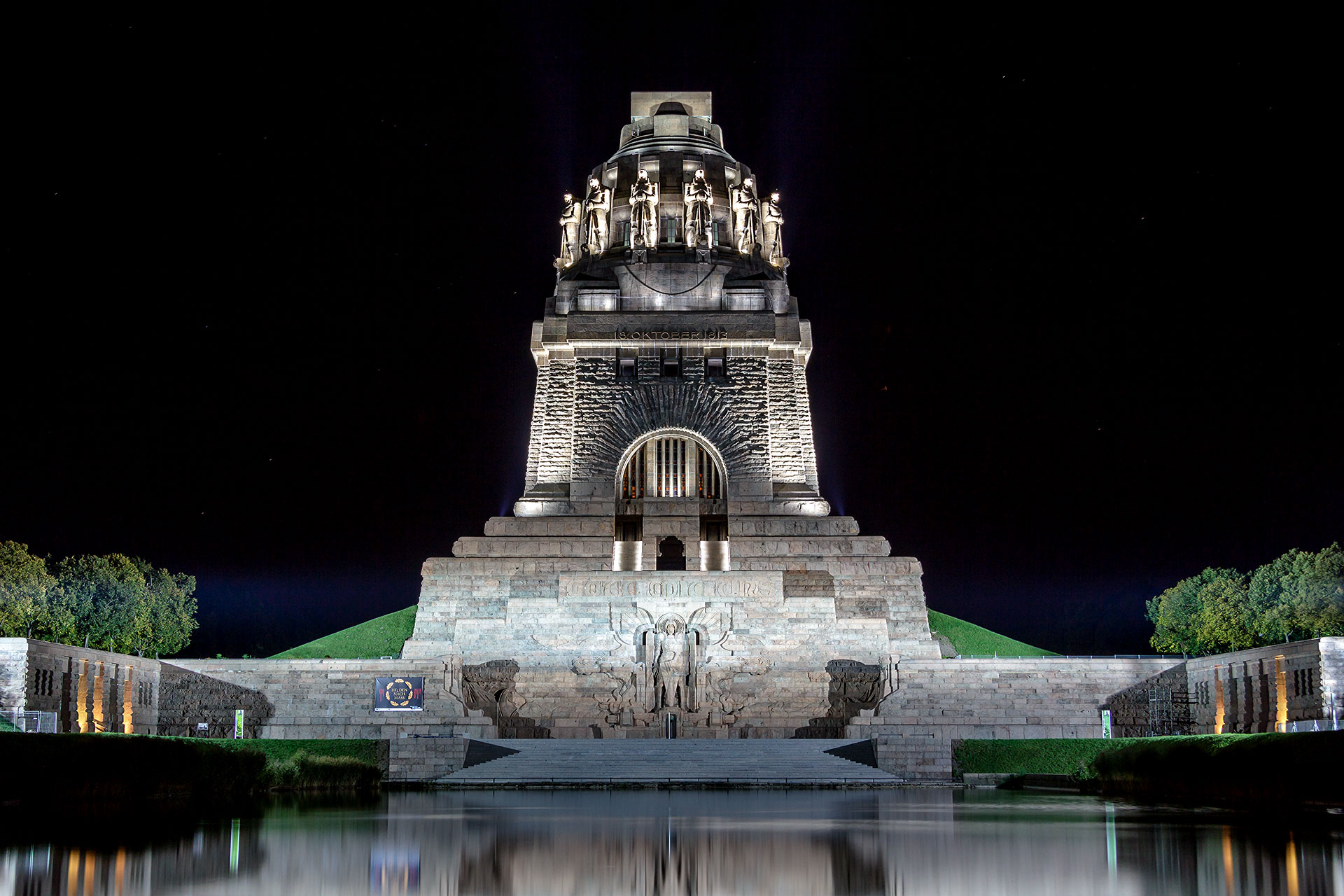 The Battle of Nations Monument

The Battle of Nations monument in south-east Leipzig was erected in memory of the Battle of Nations near Leipzig according to designs by Berlin architect Bruno Schmitz. Inaugurated in October 1913. The sculptures were created by the sculptors Christian Behrens and Franz Metzner. With a height of 91 metres, it is one of the largest monuments in Europe and one of Leipzig's best-known landmarks. It forms a landmark with a striking silhouette visible from afar. Today it belongs to a foundation under public law of the city of Leipzig.

In 1895, the German Patriots' Union announced a competition of ideas, which was won by the architect Karl Doflein from Berlin. In the autumn of 1896, a second competition in which 72 German artists participated. The Leipzig City Council had made 20,000 marks available for this purpose. First prize was awarded to the design "Walküre" by architect Wilhelm Kreis, the other places went to Otto Rieth (2nd prize), Karl Spaeth and Oskar Usbeck (3rd prize), Bruno Schmitz (4th prize) and Arnold Hartmann (5th prize).6] However, since none of the proposals fully corresponded to the ideas of Clemens Thieme, the chairman of the Patriot Union, Berlin architect Bruno Schmitz, who had previously designed the Kyffhäuser Monument, was commissioned to draw up a new design the following year.

The foundation stone for the monument was laid on 18 October 1898 in the southeast of the city. It was built according to designs by Bruno Schmitz. The client was Clemens Thieme, to whom the installation of the crypt can be traced back. It was financed by a special lottery and donations. On October 18, 1913, the Battle of the Nations Monument was inaugurated. Emperor Wilhelm II was the main guest at the inauguration ceremony; all the Federal Princes of the German Reich as well as numerous other dignitaries also attended. They drove in a motorcade from the main station to the monument on the outskirts of the city; thousands of people lined the path.

Reconstruction and refurbishment work began in 2003. Originally these were to be completed by the 200th anniversary of the Battle of the Nations in 2013. This goal was achieved for the actual monument; the renovation of the outdoor facilities (as of 2013) is to be completed in 2017. The costs are expected to be around 30 million euros. They are funded by the "Stiftung Völkerschlachtdenkmal", the Free State of Saxony, the City of Leipzig and donors.